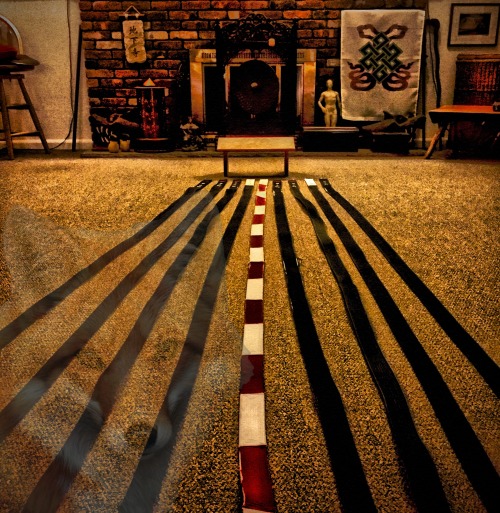 Some Native American tribes consider the appearance of wilderness creatures at certain points in one’s life a ‘spiritual event,’ portending something of the immediate future of the observer(s).

So it was a curious moment when on the eve of a promotional ceremony, a red fox was suddenly spotted in a bed of pachysandra by yudanshas, Tim Smith and Bob Giangrande, who just happened to spot the creature out of the corner of their eyes as they were training.

The fox was standing perfectly still, focused on the backyard deck where Brain Vivas and Tom Maloney were speaking with my brother.

I had the unmistakable sense the fox was weighing its options to run or stay.

I went upstairs to notify the three men on the deck of the fox’s appearance in the yard. By then the fox had turned completely around. Curiously, rather than vanish, it lay down in the pachysandra and within seconds, its face emerged with a chipmunk in its mouth.

The fox must have sensed the movement of the chipmunk in the vegetation beneath it while it was standing still, weighing its options.

As the sages often point out, stillness reveals more about our world than might, at first, be apparent. When we are quiet within the world can be heard more clearly, and not just its familiar sounds. Stillness brings to our inner ear those vital behind-the-sound-sounds, where the human spirit gets nourished.

And so, ten senior-most members of the Wind school, many with over twenty years of experience, sat still like that fox, listening to a fellow member give his presentation of Sunsu kata. He posed questions, proposed theories and demonstrated some of the nuance and complexity behind this enigmatic Okinawan form. Later, inside everyone sat quietly listening to four of their martial brothers talk about the impact of karate on their lives and training.

I believe the foxes in the room that night found some nourishment.