The Bank Street School, where I received my early training, was one of New Jersey’s pioneering dojos. Out of this school emerged William Scott Russell and the birth of his system, Isshin Kempo. Most people are not aware of how Russell came about his sokeship of Isshin Kempo. Here is a that story. 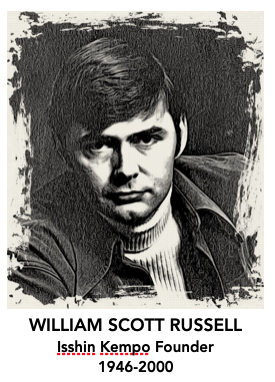 William Scott Russell was my most influential teacher in the early 1970’s. He was a dynamic, articulate, charismatic and, for some, controversial figure. Russell drew over a thousand students into the richness and allure of Okinawan karate in the North Central New Jersey region at the Bank Street Dojo where he taught from 1970-1982.

One of the controversies surrounding Russell had to do with his jump in rank after being recognized soke (founder) of his martial art system.

Few laypersons were aware of the western rank inflation that took place during the early seeding of martial arts in the United States. As karate’s popularity grew, many first generation American martial art teachers discovered that they had hit a rank ceiling. Servicemen returning to the states having been exposed to Karate and Tae Kwon Do realized the huge commercial potential of opening up a martial art school. Rank was less of a deal in the mid-fifties thru the early 60’s. Simply holding a black belt was credibility enough. But that notion had changed by the late sixties as senior karate-ka realized a higher dan rank (degree of black belt) might carry more weight and therefore attract more students, and was also necessary so that one’s own advancing students could be promoted to higher grades. Many American sensei returned to their Okinawan masters or invited them to the U.S. to continue training and to garner more rank recognition.

This phenomenon was similar to what occurred in Okinawa in the early 1900’s.  Rather than fall under the shadow of Japanese karate, the Okinawan masters decided to better organize and formalize their individual fighting systems and dan-grading structure to prop up what they saw as a failing interest in Okinawan karate.

Allan H. Good, founder of the International School of Judo and Karate (aka Bank Street), was one of Russell’s early mentors. Good, had the foresight to see that Russell could benefit from having a legitimate martial source recognize his system of Isshin Kempo and he as its founder.

Enter The Society of Black Belts of America, an organization begun by Tom Krazny and Robert Murphy in the early 1960’s. This association had gathered a large black belt membership in an attempt to form a brotherhood of U.S. martial artists. One of those senior members was Rodney Sacharnowski, a recognized soke of his own martial system. Professor Sacharnowski, an early U.S. martial pioneer, had begun training in Dai Yoshin-ryu in 1954 under Albert Church. It was Sacharnowski, through his affiliation with the Society of Black Belts, who informed Good that the man to see for Russell’s confirmation was Albert Church, also a Shorinji Tetsukempo Kamishin Ryu master from South Carolina. Church could give sokeship recognitions and legitimize Russell’s fledgling system. 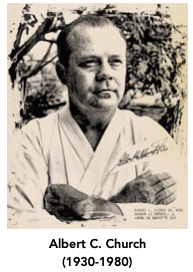 Good recognized that karate was in a disorganized state at this time, particularly regarding Dan grade belt ranking. He had witnessed Russell’s skills and unique martial perspective, and realized if Russell was to progress legitimately he would need to have his system recognized and approved by a highly regarded source. Good’s connection to Sacharnowski proved instrumental in getting Church’s organization to recognize Russell’s Isshin Kempo. Albert Church’s association with Rod Sacharnowski would only add more weight to his authorization of Russell’s sokeship.

Albert Church was an expert in a form of Daito Ryu Aikijujutsu from Kim Chi Kooh, a Korean who had inherited and ancient Chinese system. Kooh left his style to Church. Church then travelled to Japan where he won further recognitions while training with the Yokota family of Japan.

In his effort to keep the system alive and to honor Church and the Yokota family, Sacharnowski, founded Dai Yoshin-ryu, in 1997, a division of Juko-Kai International to retain what he learned in the original Yokota style. The ninjitsu master, Hatsumi, had also honored Dr. Sacharnowski and his accomplishments with a high-dan grading from the Bujinkan.

To the surprise of many of Russell’s early advanced students Russell kept his own martial studies with other masters private. In particular, was his personal training in the 1970’s with the noted Aikijitsu master, Edward Smith, of Hokushin Aiki Bujutsu, a senior student of master Katsumi Tanemura. Here is a brief correspondence Smith and I had back in 2007:

It was great delight with which I read the article on Isshin Kempo and it’s founder William Scott Russell. [Smith is referring to a June 2007 issue in Black Belt Magazine article on Isshin Kempo]. He was a close friend and fellow budoka. Mr. Russell was everything that the article described and more. He was one of the few karateka to study our Aikijujutsu lineage through seminars with Tanemura Katsumi sensei. He had an amazing eye for detail and always had insightful questions. He introduced several key people to us through our seminars and we always enjoyed his company. It was great to see his teachings covered in such a wonderful manner.

If it were not for Russell sensei, I would not have developed a healthy respect of Okinawan martial arts as my focus has always been aikijujutsu and judo. I also would not have met my senior student Matt Henderson, also well known in Goju ryu circles. Mr. Henderson attended our events

with his original jujutsu teacher Mel Chaefee- a friend of Russell sensei. I’ll never forget the brown keikogi that Russell sensei showed me many years ago- a custom one I believe. He truly was a rebel with a beautiful spirit.

I just wanted to say hello and introduce myself to you as we shared a relationship with a true gentleman warrior.

I wish your organization the best and know that it is in good hands. Thank you for your time and attention.

Regardless of the controversy surrounding Russell’s ranking at the time, he made a significant contribution to the U.S. martial community and those of us who continue to carry the legacy of Isshin Kempo into the future.