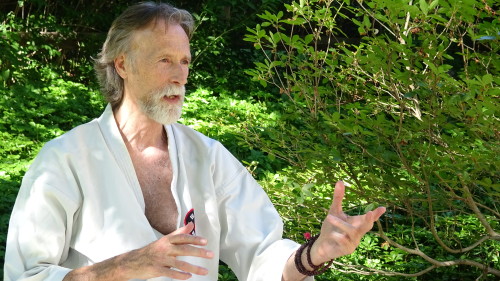 I practice karate as a form of yoga. This was not at all my focus when I was a teenager. And I suspect not many people would even understand what it means to practice a martial discipline in this manner.

Better flexibility or agile fighting skills have their place but they were always considered lesser talents when you were not being confronted by a hostile adversary or an inability to perform a task requiring looser muscles.

Hype about fighting. Hype about flexibility has distorted both the Karate and Yogic arts. But Western culture loves hype about everything. We live in a hyped-up culture today. It’s even hard to hear the real teachers over the din of the false ones because there is so much empty chatter out there.

It’s an illusion that you are going to grow fast, mature fast, succeed quickly—or do it all by yourself. That’s for a very rare few.

Life itself is an art and disciplines like yoga and the martial arts are there to aid us in our journey if used properly. However, the mainstream has lost its way in regard to these arts. More and more arts are being used for self aggrandizement. And many arts are becoming superficialized, watered down, even degraded.

The reason for the decline is that most people are pursuing lopsided goals. There is very little real or meaningful spiritual cultivation taking place in mainstream martial and yogic communities. This is what distorts our goals. Everyone’s in a rush to gratify themselves. Get that certification, get that belt. Get, get, hurry up and get important.

Look for the grounded paths, the clear-minded ways. They are out there. Choose your disciplines and teachers carefully. They are always calling the seekers.

Sit down and think about what really matters in life. That is when you will see the deep arts loom into view.