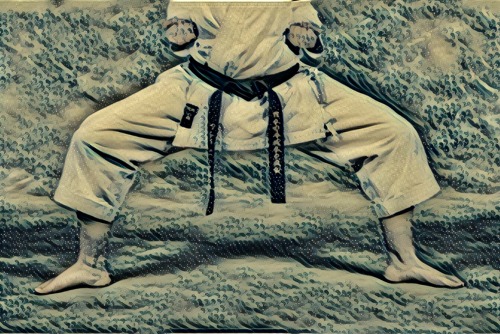 One thing that I have come know in my forty-six years of teaching is that you can never know definitively who is right or who is wrong about a physical art like karate in a purely academic arena. In other words, talk can be cheap and it can also be misleading. The mind is meant for understanding the nuances of our craft and giving our body direction, but our body is meant for action and that is where the meaning of a technique and its results count. All the talk regarding karate ultimately lies in your ability to test what you are told and put it to good use in the real world. I’m all for healthy discussion and debate that prepares the arena for action. But for anyone to say this is the way it is or isn’t about how to punch or kick or block or lock, without an actual test, is simply misleading.

Even in matters of historical research I find as scholars dig deeper some of our previous held beliefs and conventional understandings about karate and its techniques have gotten turned upside down. Nobody is going to pull your heart out with a spear hand. The Okinawan farmers didn’t beat the Japanese samurai. Kata possesses way more knowledge that anyone could ever imagine.  The karate myths I was taught as truisms back in the 1960’s have since popped like chewing gum bubbles. Historical research gives us a more sobering and grounded perspective on the martial arts with each passing year.

I would like to briefly address the practice of a karate stance called the Shiko Dachi, or what we know as the Seiuchin dachi, from my perspective as a career practitioner and teacher. Volumes could be written about the stances of karate; their history, their functionality, their symbology, their cultural relevance, even their role as something more than musculo-skeletal levers and conveyors.

Every sensei worth his or her mettle as a guide will discover that the novice needs concrete information to progress in their arts. If you want a student to flounder just be ambiguous when explaining a technique to them. “Well, it could be this way or that way, and on Monday’s we straighten the back leg, but on Wednesday we keep it a wee bit bent.” Or, create a rigid boundary so stiff that the student can’t even breathe without catching your eye. A returning kyudansha, who had studied under two different isshinryu sensei told me that that he was informed when sinking down from his Seisan dachi he must “Never, ever” pivot on the heel of his back foot. I asked for the rationale. None was provided to him. He just knew that he must never, ever do such. Honestly, this is dysfunctional teaching. “Prove it?” He couldn’t. The advice was wrong.

A dachi must begin as a fixed position for the novice. If you were a beginner, and asked me what a Shiko Dachi (otherwise, Seiuchin stance) was, I would explain the dachi’s body structure in precise detail for you to anchor into. I didn’t say, I’d explain the foot position. I would explain the whole body structure. Dachi are not just ‘foot’ positions any more than a bow is exclusive to the arrow and the bowman.  Since so few karate-ka go into deep study of their arts, we now have too many junior masters (masters by longevity or rank, not necessarily by deepening skills) who have not outgrown their early and limited notions of fixed dachi.

I recently read an article entitled “Is The Shiko Dachi Pointless?” The author went on to discredit the low posture to all but kata rehearsal, and to say it was also considered a Horse stance. I couldn’t disagree more with his opinion. The two stances are very different in structure and purpose.

A Shiko dachi is distinguished by the following factors; heels one and a half shoulder width apart, feet turned out 45 degrees, pelvis tilted slightly back, neck held slightly forward, torso also inclined slightly forward, anal sphincter relaxed. The Shiko dachi is a Water element stance. Yang or descending meridians are switched on in this posture. In this posture energy descends. Most arm motions associated with the Shiko dachi extend to the left or right of the torso, rather than in front of it. It is used to bring the opponent down or to follow an opponent down to properly apply a joint-locking technique.

There are five layers to form work; the individual technique or tool (in this case the Shiko dachi), the selection of a set of techniques called tactics to achieve the overall goal called strategy, the state of mind, and finally, the raw energy currents circulating through and around the body. Whether we look at these five layers from the bottom up or top down, each one exerts influence over the other. A Shiko Dachi must be viewed with these five layers in mind. For example, the overall stability of a Shiko dachi held by a person lacking in confidence is not the same ‘posture’ as one who is confident.

Academics may debate that the ‘physical structure’ of a proper Shiko dachi has more integrity than say a narrower stance, to which I would say, find me a Shiko dachi without a psychic inhabitant. In other words, narrow or wide isn’t going to matter much if one lacks confidence in the stance overall. In the world of action we must always look at the whole entity; body and mind, and look beyond the conventional thinking that stances are just foot and leg positioning. Things are not what they appear when you take a hard look at Traditional martial postures. Blocks become strikes. Strikes become blocks. Even stances can become blocks and strikes on certain occasions.

All stances are both transitory and transitional. They flow kinetically, stimulating obvious and hidden bodily energies. Hopefully, the novice will eventually awaken to this awareness. In our school we have two distinct, but not mutually exclusive, rationales for any standing posture. We have the obvious musculo-skeletal leveraging, conveying and weight value of the stance, and we have its bioenergetic quality. I find most karateka are at a loss understanding what a stance’s bioenergetic reality is outside of ‘doing it vigorously’. Put simply, every posture creates a dynamic flow of interior energies. Slight shifts in the physical posture, including the angles of the foot, the pressures of leg depth and width, will shift these forces. There is an art running beneath the biomechanical nature of karate and it is extraordinary, and part of the true legacy of the martial arts.

When a novice can precisely execute a fixed Shiko dachi, he or she is ready progress into the many technical gradations or ‘expressions’ of the stance.

From my end, you have to see the energy effects of these slight changes in a stance posture to believe them. Counter intuitive? Yes, which only makes stance work all the more fascinating. We’ve had over thirty yudansha with a combined total of over six hundred years experience tearing up the ground on this topic.

Our intent is to make this information available to the senior most karate-ka in the U.S. if they are unfamiliar with this technical bonanza. We’d also like to see a reinvigoration of the Karate arts which have been taking a back seat to MMA-hyped advertising and misleading statements like the one espoused in the article I came across.

Keep in mind, once you select an individual technique to practice, there are multiple levels to training with it. This multi-tiered understanding of karate technique represent the best of our Traditional form work.

The more martial artists we get into broadening this dialog, the more exciting and forward moving this information will become!

The Shiko Dachi is not pointless!