Of Swordsmen And Rat Catchers 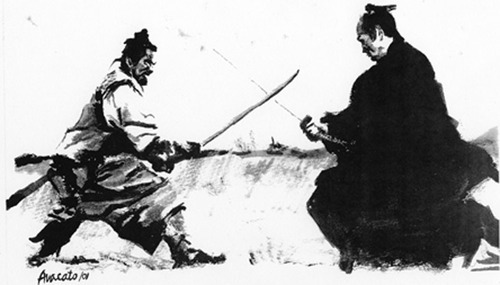 A Retelling By Christopher J. Goedecke

(This story was originally entitled The Wonderful Art of a Cat. It was written to describe the importance of spiritual elements within the Martial Arts. The original author was Ito‑Tenzen‑Tadanari, the eldest son of Ono Jiroemon Tadaaki, the originator of the Ono School of Japanese Fencing. His father, Jiroemon, was the highest disciple of Ito‑Ittosai. After fighting against his rival Ono Zenki, and winning the match, Jiroemen was recommended as Ittosai’s successor. He became Ittosai the Second. In 2005 I revised this story for my own personal enjoyment which is presented here).

A Japanese Fencing expert named Shoken returned to his house to find it had become occupied by a large rat. The rat was so bold that it ran freely about in the daytime forcing Shoken to close up his house to give his cat the opportunity to catch it. Unfortunately, the rat sprang upon his cat, bit its face, and sent it away whimpering.

Shoken then gathered many excellent rat catchers from his neighborhood and placed them all in his house. However, when any cat drew near, the rat sprang upon it and bit its face.

Near exasperation, Shoken summoned his servant. “I’ve heard that there is an excellent cat owned by our neighbor,” he said. “See if you can borrrow it.”

The faithful servant returned with a cat, neither wise nor quick looking. Nevertheless, Shoken placed it in his house. The rat appeared instantly scared of this cat and froze, allowing the cat to easily drew near it and dispatch in its mouth.

The other cats, despite their sharp claws and training, were surprised at their own inability to catch this particular rat. So that night they all gathered in Shoken’s house and politely asked the old cat how he caught the rat so easily.

The old cat laughed saying, “You are all young and even though you have worked hard, you were never exposed to rat catching the right way. You have not learned what to do against an unexpected opponent. However, before I tell you my secret, let me hear about your training methods.”

The black cat spoke first. “I was born into a family of expert rat catchers. I can jump over a folding screen as high as seven feet and pass through a very tiny hole. Since I was a kitten I have trained myself as an excellent jumper. I have never failed to catch a rat whether it ran on the beams of the house or under any other circumstances. But today, I met an unexpectedly strong rat which I could not catch.”

The old cat replied, “You have only trained how to catch a rat by ‘aiming’ at your opponent. In olden days, our master required we study the ‘final principles.’ You have attempted to master techniques that stray from these principles. I hope you consider this point.”

A large cat, like a tiger, stepped out saying, “I think it is important to master the spirit of rat catching. Considering that I have mastered this, I have never failed to follow a rat whenever it ran and placed it under my feet. I have caught rats running on house beams without preparation. But this rat showed no figure while it ran about. Can you tell me why?“

The old cat replied, "You are filled with conceit, active only when victory appears certain to you. This attitude cannot be admired. Try to break and leave, and your enemy may try to break and come forth. Try to cover and crush, and your enemy may also try to cover and crush. What happens if some area remains which you are unable to cover? How can you believe that you are always strong and your enemy is always weak? Even though you say you have mastered the spirit of rat catching, you suffer from an illusion that this is Mencius’ vast‑flowing vigor. Though it appears similar, it is quite different. Relying on your vigor when your victory is certain is like comparing the normal currents of a river to the temporary currents of the flood. Suppose you meet a superior opponent? What then of your tactics? There is an old saying: ‘Watch the courage of a cornered rat!’ Such a creature will attack with complete desperation. It will rely only on itself and no one else. It will not cling to its own life; rather, it will forget all its own selfish desires. Such a rat cannot be caught by you.”

Next, a little old grey cat stepped out quietly and said, “I have been training hard and also placing emphasis on the spirit. I am not conceited, I do not like fighting, and I wish to be friendly. If my enemy is stronger than myself, I follow him instead. Even a strong rat could not be my enemy. But I was unable to either beat or make a friend of today’s rat. I have never seen such a rat that behaved like a God.”

Shoken, the Japanese Fencing expert, also paid his respect to the old cat and said, “I have practiced Japanese Fencing very hard, but to my regret, I have not yet mastered it. This evening, however, I believe that I have understood a secret about martial arts after listening to your discussion.

"I am an animal which lives on rats,” the cat said. “How would I know about human problems? But I can tell you that Japanese Fencing should not consider victory alone. In an emergency, a man should know the vital lesson of how to live or die. To solve a life or death problem you must be without doubts or prejudices. A mind calm and free will be ready in any emergency. When fighting an enemy most men are not free and thus cannot properly combat their opponents? Even if you are victorious, such victory is blind if your spirit has no shape. If you are too vigorous, you will be unable to stop at the proper place. If you are not vigorous enough, you will be unable to fight. Do not cling to a single thing. Your mind must be free to fight against your enemy at any moment. In short, there should be no enemy. There should be no self. In this manner you will always be ready for whatever comes.”

Hearing this, Shoken asked, “What do you mean when you say there should be no enemy and no self?”

The old cat answered, “If there is no self, there will be no enemy. If nothing is in your way, there cannot be a dispute. This means that there should be no enemy; there should be no self. To be free there should be nothing favorable or unfavorable. To understand this you must reflect upon yourself. Your master will teach and attempt to enlighten you but it is your responsibility to grasp the truth. Self‑realization is always a tacit understanding between teacher and disciple. No master can explain such truths to you. Warriors, Zen Masters, men of virtue, artists, etc., will say that things worth mastering must be understood tacitly. They can only point out the things which you possess, but which you have been unable to realize and activate within yourself. Nothing can be ‘given’ to you by any master or teacher except the direction to where the truth can be found. It is easy to listen to what you are taught, but difficult to find what you have within yourself and to master it as your own. This is called self‑realization. When it is grasped you will feel as if you’ve awakened from a foolish dream. I shall be happy if you understand that the essence of swordsmanship, the essence of martial arts, and the essence of rat catching is not the strength, nor even the art, but that which is hidden deep within yourself.

Christopher J. Goedecke is a career martial arts teacher and author of The Soul Polisher’s Apprentice.